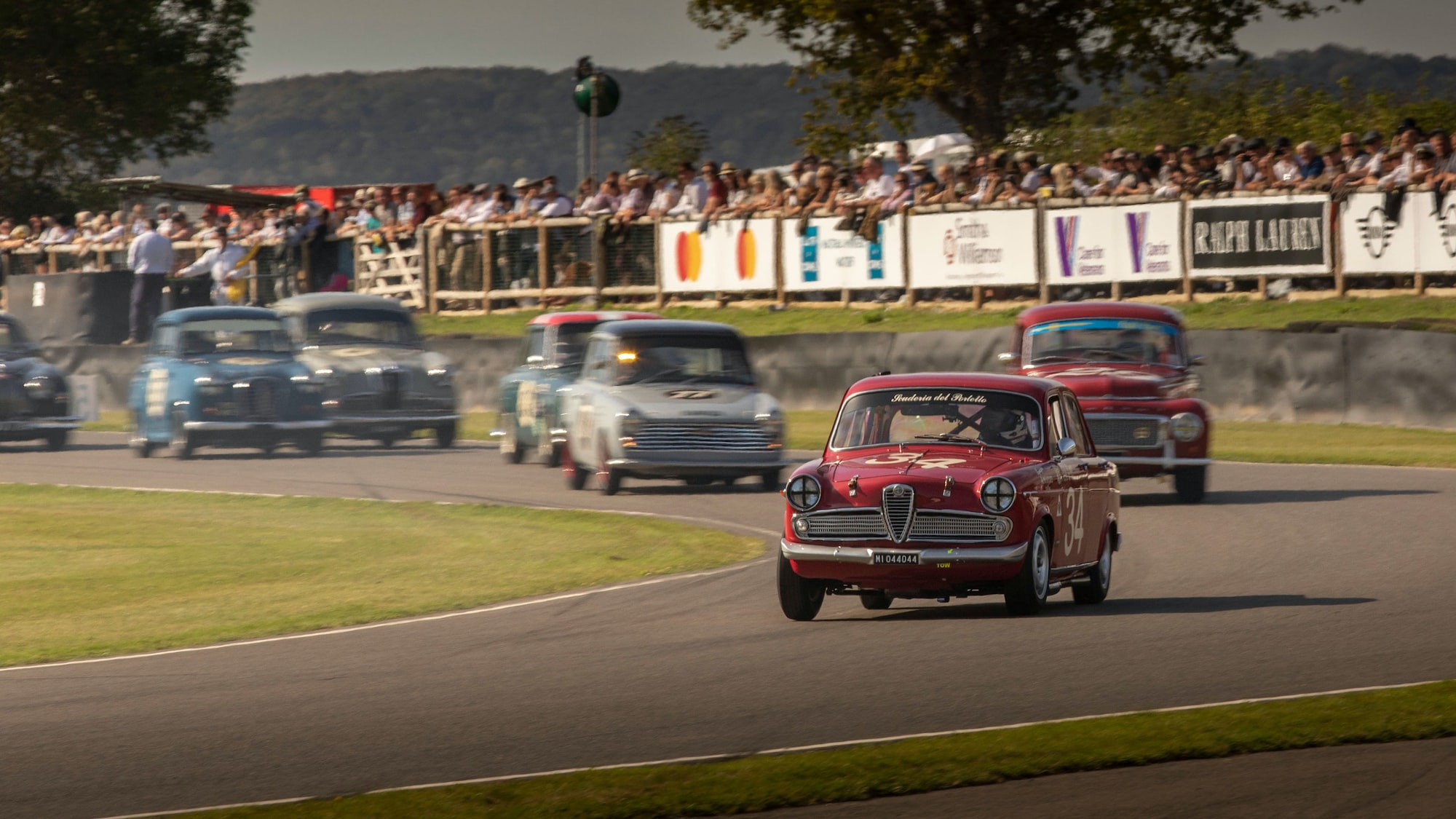 Goodwood Revival is a celebration meant to revive the spirit of the ’50s and ’60s. No other motoring event in the world has the same sort of charm, and you’re certainly not going to see an entire herd of Ferrari 250 SWBs going neck and neck anywhere else. It’s the only place where you’ll witness an all-out battle on the track between cars like a monstrous ’57 Thunderbird “Battlebird” and a cute ’60s Alfa Romeo Giulietta racing as they would have in their heyday (and people dressed, as is required, in period-correct costume as well).  It’s also the perfect environment to geek out to just about anything mechanical. And as I learned, that certainly includes watches.
We collectors obsess over small design details and permutations that very few people will ever notice, let alone care about to the same extent that we do. Hours are spent scouring the internet for that Dot Over Ninety Speedmaster, a few lines of red text on an old Rolex Sea Dweller, or a vintage Seiko that reads “proof” instead of “resist.” Sometimes it’s even an inscription in the caseback that surely no one will see. But it’s these minute details that go unnoticed by everyone else, that bring us fulfillment as collectors. It’s like a little secret that you carry on your wrist. Perhaps it’s an entirely personal connection, like the watch you got married in, or maybe it’s a customized watch made for your organization. Either way, there’s a story. And we rarely get to share those stories publicly.

When I started asking strangers to take a photograph of their watch at Revival, it wasn’t met with any sort of hesitation or suspicion. Instead something entirely different happened. Before I could even get the autofocus locked onto their watch, folks were halfway through the story of how it came to them.
A small insignia on the dial of a Breitling B-1 on the wrist of a commercial helicopter pilot served as a jumping off point that led me to discover that during the week he flies Apaches for the British Army. He had even deployed to Afghanistan. When I asked another fellow about his watch, he said that it was his grandfather’s. The period-correct nature of Revival prompted him to dust it off and think about the legacy his grandfather had left behind. When I photographed another person’s watch that I spotted, they quickly ran to get their buddy so we could all talk watches. They were so ecstatic to have their watch photographed that you would never guess million dollar classic cars were ripping around the track just 30 feet away.

The generation of Thunderbirds from ’58 to ’60, seen here, are called “Squarebirds”

English Racing Automobiles, or ERA, produced a limited number of race cars in the ’30s. The poster child for the marque is Thailand’s (then Siam) Prince Bira. He raced these cars in period. He was a prolific race car driver and pilot on top of his royal duties. He’s also sort of a hero of mine. A short drive from Bangkok there’s a racetrack named in his honor.

The “rising sun” dial caught my eye on this Girard Perregaux.

Yes, the fin looks awesome, but it does actually help stabilize the Jaguar D-Type at speed.

This helicopter pilot was flying an Eurocopter AS350 Écureuil on a Saturday when this was taken. On Monday he went back to flying the AH-64 Apache.

The parking lot is just as impressive as the show.

British Racing Green isn’t a set color. The term refers to any shade of green that’s painted on an English race car.

The “Battlebird” was one of four purpose-built 1957 Thunderbirds engineered to go very fast in a straight line. Turns out it isn’t too shabby in the corners, either.

In WWI horses were still used to haul gear around. WWII saw the advent of the Jeep.

Think a 10 million dollar car gets babied at Goodwood? Nah. These were meant to be driven, not pampered.

A row of Ferrari 250 SWB race cars. For many, these Ferraris are the star of the show.

The “Prancing Horse” was originally painted on the side of Italian pilot Francesco Baracca’s plane during WWI.

Even the camera is period correct.

MB&F Legacy Machine No.2 Red Gold Blue Watch Will Be Last Ever In Red Gold

July 17, 2019 OzWatches Comments Off on MB&F Legacy Machine No.2 Red Gold Blue Watch Will Be Last Ever In Red Gold

May 19, 2019 OzWatches Comments Off on Ganymede Watches Series 01 | aBlogtoWatch